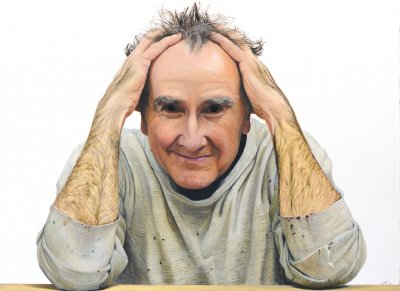 Jon R. Friedman’s portraits, landscape paintings, and sculptures have been shown in exhibitions throughout the United States. His portrait work is represented in numerous public and institutional collections here and abroad, including the National Portrait Gallery, the U.S. House of Representatives (where his portraits of Barney Frank, Henry Waxman, Louise Slaughter, and Dalip Singh Saund are on permanent display), the National Academy of Sciences, the National Institutes of Health, the Federal Reserve Board, the American Philosophical Society, the Carnegie Institute of Washington, the Royal College of Surgeons, the Royal Society in Great Britain, the Norwegian Academy of Sciences and Letters, the Massachusetts Institute of Technology, the California Institute of Technology, the University of Pennsylvania, New York University, Brandeis University, Wesleyan University, the U.S. Eighth Circuit Court of Appeals, the U.S. Court of Appeals for the Federal Circuit, the U.S. District Court for the District of Columbia, and the U.S. Court of Appeals for the DC Circuit.

In 2016 Friedman was elected to the American Philosophical Society, which recognized him as a painter of “striking portraits that creatively capture the personality and life work of the person.”

Friedman grew up in Arlington, Virginia. He received a B.A. in philosophy from Princeton University and an MFA from the Cranbrook Academy of Art in Bloomfield Hills, Michigan. He also studied at the Corcoran Museum School in Washington, D.C. and the Skowhegan School of Painting and Sculpture in Maine. He lives with his wife, the writer Joanne Barkan, in Manhattan and Truro, Massachusetts.